Thanks to a rich history, with no less than three world records, Rotterdam is renowned both nationally and internationally as a leading running event. A super fast course, excellent and innovative organisation, inspiring spectators and a unique atmosphere on the Coolsingel has meant that the NN Marathon Rotterdam has grown into the biggest marathon and the biggest one-day sporting event of The Netherlands. A celebration for every runner.

On 23 May 1981 Rotterdam experienced the premier of its international marathon. Great sporting events don't just happen to exist, they, like the marathon in Rotterdam, have a memorable history.

The idea of an international marathon in Rotterdam originated in 1980. On 17 May of that year the Rotterdam Athletic Union PAC organised the national 25-kilometre championship to commemorate its 85th anniversary. Cor Vriend, Barry Kneppers and Bram Wassenaar stood on the Coolsingel medal podium as numbers one, two and three respectively.

Rotterdam had already acquainted itself with the marathon before the Second World War. The course, which was financially supported by the magazine Het Leven, went from the Nenijto-sintelbaan to Nieuwerkerk aan de Ijssel and back. In 1937 the race was considered to be the national championship. The title went to Bram Groeneweg from Rotterdam (2.54.06). The competition for the national title was once again held on 22 July 1950 on the tried and tested course, with Adri Moor from Eindhoven as the winner in 2.58.12. It took until the sixties before Metro, another athletics club from the city on the Maas, dared to take on the organisation of a marathon. The club held such an event four times on a course through the Kralingse Bos. 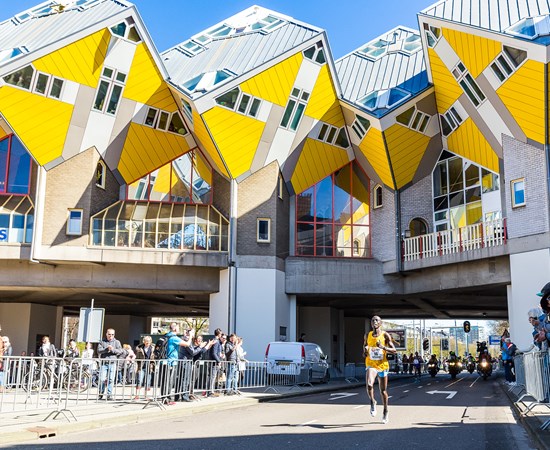 The success of the NK (national championship) 25 kilometres in 1980 begged a sequel. Gerard Rooijakkers, a civil servant from the Municipality of Rotterdam, took the initiative to organise a meeting with representatives from the clubs in Rotterdam. They however, appeared to prefer a synthetic athletics track to a marathon. Nevertheless, the organisation of such a marathon turned out easier to realise than thought at first. The original plan to hold the marathon in September 1980 was not feasible, so the spring of 1981 was chosen.

On 23 May 1981 the new Marathon Rotterdam experienced its christening literally and figuratively. On that day the heavens opened up and it rained cats and dogs. Fewer than 200 runners stood ready on the Boszoom at 15.30 hrs, among them John Graham (photo). Rotterdam owes the then 24-year old Scot a million thanks. Following an impressive solo he arrived at the Coolsingel after six rounds through the Kralingse Bos 2.09.28 later. Graham's time was so astonishing (the third in the world that year) that the Teletext service of the Dutch broadcasting service NOS dared to suggest that the distance might not have been measured correctly! Graham's achievement, rewarded with 750 British Pounds, immediately put Rotterdam on the marathon map. Jacques Valentin, finished as first Dutchman, in third place.

While the rain plagued the 1981 marathon, a year later the wind acted as the spoilsport. Two renowned athletes attracted attention on 22 May 1982: Gerard Nijboer and the Mexican Rodolfo Gomez. Both had played an important part in the Moscow Olympic marathon (1980). Nijboer won a surprising Silver medal and Gomez had ended sixth. Nijboer, who on 26 April 1980 broke the European and Dutch record with 2.09.01 and repeated that performance again in Moscow, did not finish this time. Gomez won after a fight with the strong winds in 2.11.57. Later that year Nijboer was crowned European champion in Athens.

Gomez came to Rotterdam again a year later. The month of May was exchanged for April and on the ninth of that month stood - on what was now a real city course - a very strong field of runners with Australian Robert de Castella, the Portuguese Carlos Lopes, Rodolfo Gomez and his cousin José, The American Alberto Salazar and the Belgian Armand Parmentier. It was an impressive marathon that, especially due to the arrival of Salazar, attracted a lot of international attention. The six stayed together for 35 kilometres. De Castella and Lopes finally sprinted to the finish on the Coolsingel. The Australian won in 2.08.37 followed two seconds later by the Portuguese, who later gave Rotterdam its first European record. The times of the two were the first and third of that year. 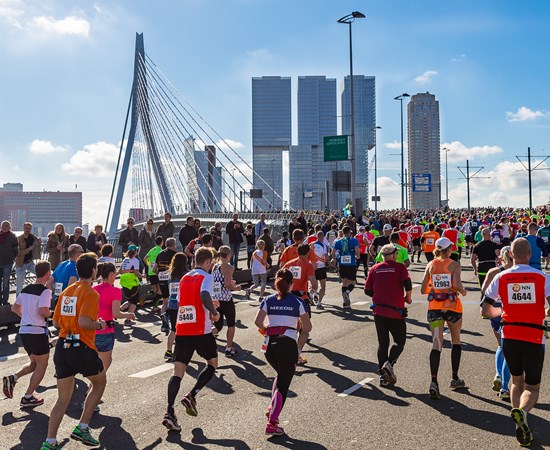 Carlos Lopes was the big star in Rotterdam on 20 April 1985. He ran the world record in 2.07.12 and became the first human being to run the 42.195 kilometres within two hours and eight minutes. A year later Rotterdam made the acquaintance of the Ethiopian runners. On 19 April Abebe Mekonnen and Belayneh Densamo (photo) ran in a synchronised manner on the Rotterdam course. Mekonnen won with a lead of one second in 2.09.08. Densamo has however bound his name to Rotterdam forever. Firstly through the world record that he broke on 17 April 1988 (the first time that the race was held on Sunday) with 2.06.50 and secondly, because he appeared at the start in Rotterdam seven times and won four times (1987, 1988, 1989 en 1996).

Since 1999 all Rotterdam winners have been from Kenya. Among them was Josephat Kiprono, who with 2.06.50 equalled Densamo's course record and ran 2001's best time. On 04-04-04 it was the Kenyan Felix Limo's turn to tie his name to the Fortis Marathon Rotterdam forever. With a course record and personal best of 2.06.14 the colourful Limo showed once again that Rotterdam has the fastest course in the world.

In 2006 Sammy Korir narrowly missed Felix Limo's course record. Korir's time of 2.06.38 was the year's (2006) best. Paul Kiprop Kirui came second in 2.06.44 and the third place went to Charles Kibiwott (2.06.52). William Kipsang sharpened the course record on 13 April 2008 to 2.05.49. A year later the Coolsingel experienced a breathtaking marathon final. The Kenyans Duncan Kibet and James Kwambai finished, after a thrilling final sprint, in the best time ever run in Rotterdam: 2.04.27. Thanks to their performances (no one was faster in 2009) Rotterdam, on the basis of the ten best times, is considered to be the world's fastest marathon city.


Tegla Loroupe proved that women are also super fast on the Rotterdam course. The Kenyan came to the city on the Maas for the first time on 20 April 1997. She ran a race record of 2.22.07. A year later Rotterdam became the first marathon that held both the men's and the women's world record. Tegla Loroupe finished on the Coolsingel in 2.20.47, which is still the course record. That led to great envy at the London and Chicago marathons, which tried all kinds of ways to denigrate the performance because it was achieved in a mixed race. The following year Tegla Loroupe ran and won again in Rotterdam in 2.22.48. 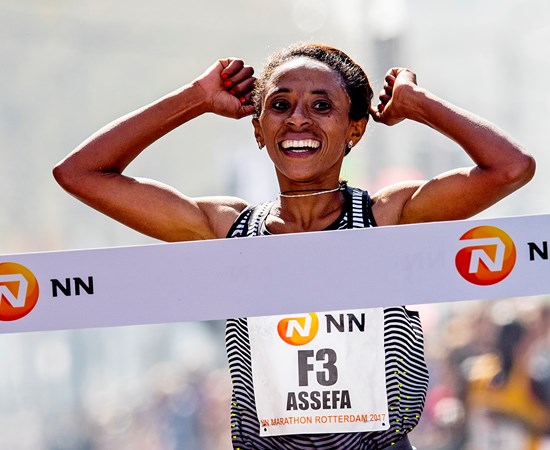 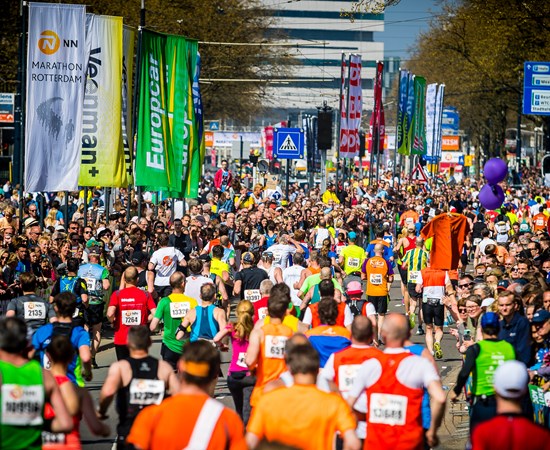 Many international appealing athletes have crossed the finish during the Marathon Rotterdam. Carlos Lopes, Belayneh Densamo and Tegla Loroupe are the best known names, because they all run a world record. In 2009, the course record of William Kipsang, 2:05:49, was blown away by Duncan Kibet with 2:04:27. With this time, the NN Marathon Rotterdam became the second most fast marathon in the world.

Here you can find a Wall of Fame with all the winners of the editions of the Marathon Rotterdam.