Bashir Abdi, the high-profile bronze medal winner in the marathon at the Olympic Games, will be chasing a record in Rotterdam after his success in Japan. The Belgian top athlete of Somalian origin will add the European record to his name on Sunday 24th October during the 40th edition of the NN Marathon Rotterdam.

,,Rotterdam is the city of the marathon for me,’’ says 32-year-old Abdi. ,,It has a fast course and the organisation is always excellent. Additionally, ‘Rotterdam’ feels like a home match for me. I don’t get that anywhere else. If I have any chance of beating the European record anywhere, then it is here, but I will have to do my very best for it.’’ 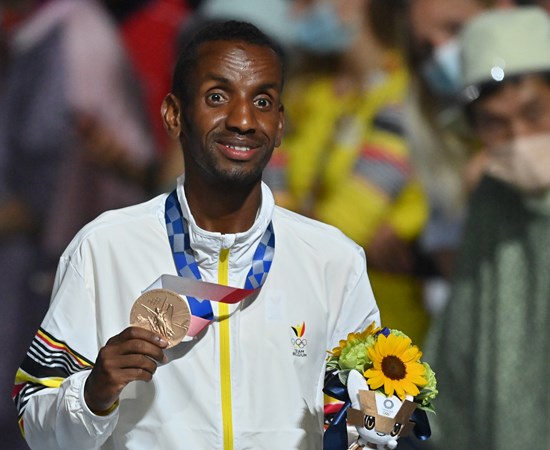 After the Olympic race in Sapporo on 8th August (2.10.00), the NN Marathon Rotterdam will be his sixth competition over the classic distance of 42.195 metres. In his own country, Abdi is revered after winning an Olympic marathon medal for the first time since Karel Lismont also won bronze in 1976. As one of the seven Belgians that returned from Japan with a medal, he was cheered on passionately at the homecoming parade on the Grand Place in Brussels.

His remarkable Olympic third place did not elude the rest of the (sports) world either. Abdi grabbed bronze after a spectacular final sprint, in which he was swept up so much by his enthusiastic Dutch friend and training buddy Abdi Nageeye, that he left Kenya’s Lawrence Cherono in his wake in a blood curdling final.

Nageeye, with whom he had trained for two months, grabbed silver behind Kenyan winner Eliud Kipchoge. In 2019, Nageeye set the Dutch record at 2.06.17 during the NN Marathon Rotterdam. This autumn, he is going for the race in New York.

Bashir Abdi is staying closer to home and setting his sights on the European record in Rotterdam. That is currently held by Kaan Kigen Özbilen with 2.04.16, a Kenyan who is naturalised Turkish and used to be known as Mike Kipruto Kigen. Özbilen ran the record time in Valencia in 2015.

,,I have recovered relatively well from the Games,’’ says Abdi, who also holds the best time ever in the 20,000 metres (56.20,02). ,,On Sunday, I will be running the Great North Run in England, a half marathon, and I will get a better idea about where I am at. In any event, I will go to a training camp in France to prepare for the marathon of Rotterdam afterwards.’’

At the NN Marathon Rotterdam, Abdi wants to add a new chapter to his incredible life story that has already led to the book ‘Op de loop’ [On The Run]. He fled from Somalia, married a Dutch girl and took up athletics late in life. The secret behind his success? Believe in what you do, work hard and dream big. That is also the motto that he will share with his daughter Khadra (3) and son Ibrahim (2). His Olympic medal hangs in the children’s room at his home in Ghent by way of an example.

Organiser Mario Kadiks has stated that he is very happy to be welcoming the ambitious Bashir Abdi. ,,We are looking forward to his performance in Rotterdam. We are busy with the preparations for our 40-year jubilee. We also depend on the regulations surrounding corona. We hope that the government will give us enough space to organize our marathon in a beautiful way. It is very important that we quickly obtain clarity from the national government about any restrictions, so that we can take the necessary measures in time.’’