In addition to the already announced Marius Kipserem (Course Record Holder) and Bashir Abdi (Olympic Bronze medal winner), the start of the 40th NN Marathon Rotterdam will see a couple more runners who perform at international level. The anniversary edition on Sunday 24 October will feature no fewer than eight athletes with a PR of 2.04, 2.05 or 2.06.

Kenyan Kipserem, who made a lasting impression with his victory, course record and PR (2.04.11) in the memorable 2019 race, is the leader of the pack on paper and is going for a hattrick again. Solomon Deksisa from Ethiopia will be breathing down his neck (2.04.40). Bashir Abdi, Belgian of Somali descent, is the third 2.04 runner (2.04.49) and has announced that he wants to attack the European record of 2.04.16.

Kenyans Emmanuel Saina (2.05.02) and Gideon Kipketer (2.05.51) form together with Ethiopians Dawit Wolde (2.06.18), Kebede Wami Tulu (2.06.32) and Limenih Getachew Yizengaw (2.06.47) a group of five other highly acclaimed athletes who want to excel themselves at the 40th NN Marathon Rotterdam and are aiming for a surprise. 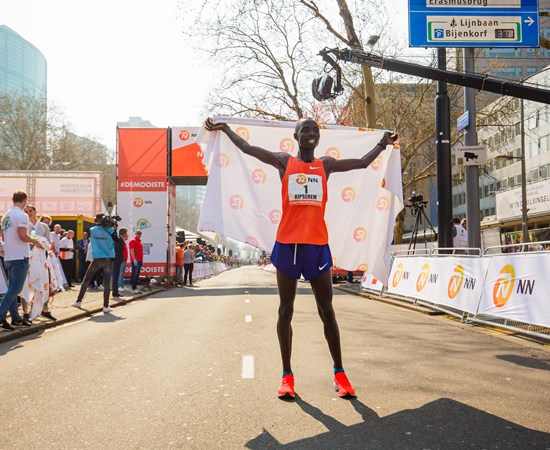 A second group of 15 athletes will be setting off at a slower pace. These runners include Dutchmen Roy Hoornweg and Floris Willeboordse amongst others. Hoornweg has already made a name for himself as hare and is now making his official marathon debut. Willeboordse is keen to improve his PR of 2.30.01 (New York, 2019).

Abdi Nageeye, who ‘flew’ over the fast Rotterdam course to grab the Dutch record of 2.06.11 in 2019, has opted for the New York marathon this year after his Olympic Silver medal. Nageeye also stood out in Japan by literally and figuratively piloting his Flemish friend Bashir Abdi to grab bronze. However, Bashir will be coming to the Coolsingel.

Mario Kadiks is happy with the field of participants in the 40th NN Marathon Rotterdam, both in the men’s and women’s races. After 35 editions of many highs, he is stepping down as organiser of #demooiste. ,,With so many top athletes brimming with boundless ambition it looks  set to be an exceptional jubilee.’’